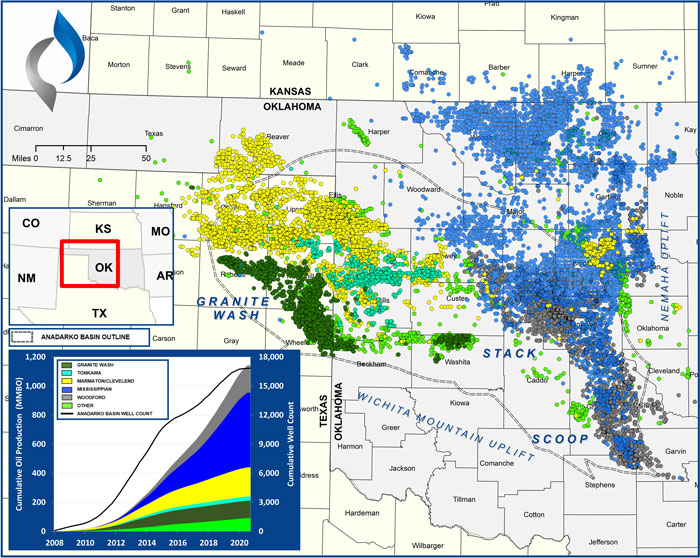 This graphic presents all Anadarko Basin horizontal wells completed since 2008.

Unconventional exploration of the Anadarko Basin originated in Western Oklahoma and the Texas Panhandle. The basin, however, stretches over 70,000 square miles, and extends into Colorado and Kansas. Exploration efforts started as early as 2011 in the STACK (Sooner Trend, Anadarko Basin, Canadian and Kingfisher Counties) with most operators targeting Mississippian intervals (Meramec, Osage, Chester, and Sycamore). The SCOOP (South Central Oklahoma Oil Province) is to the south of the STACK and operators mainly target the Woodford Shale in this geographic area.

The Woodford Shale (considered a self-sourcing horizontal target) is thought to be the primary source rock for most of the Anadarko Basin unconventional reservoirs. The Woodford and various Mississippian-aged reservoirs are heavily targeted in the STACK and SCOOP plays, located on the eastern side of the Basin. Due to wide ranges in depth, pressure, and maturity, industry focus in the Woodford has shifted between generally downdip gas-prone reservoirs to the shallower more oil-prone reservoirs.

VSO sourced landing bench and production data from IHS to prepare these maps.

VSO has completed extensive analysis of well performance and productivity throughout the Appalachian Basin. Additional reservoir and geologic capabilities include:

Assessment of Development Potential and Risks

Evaluation of Well Performance and Interference